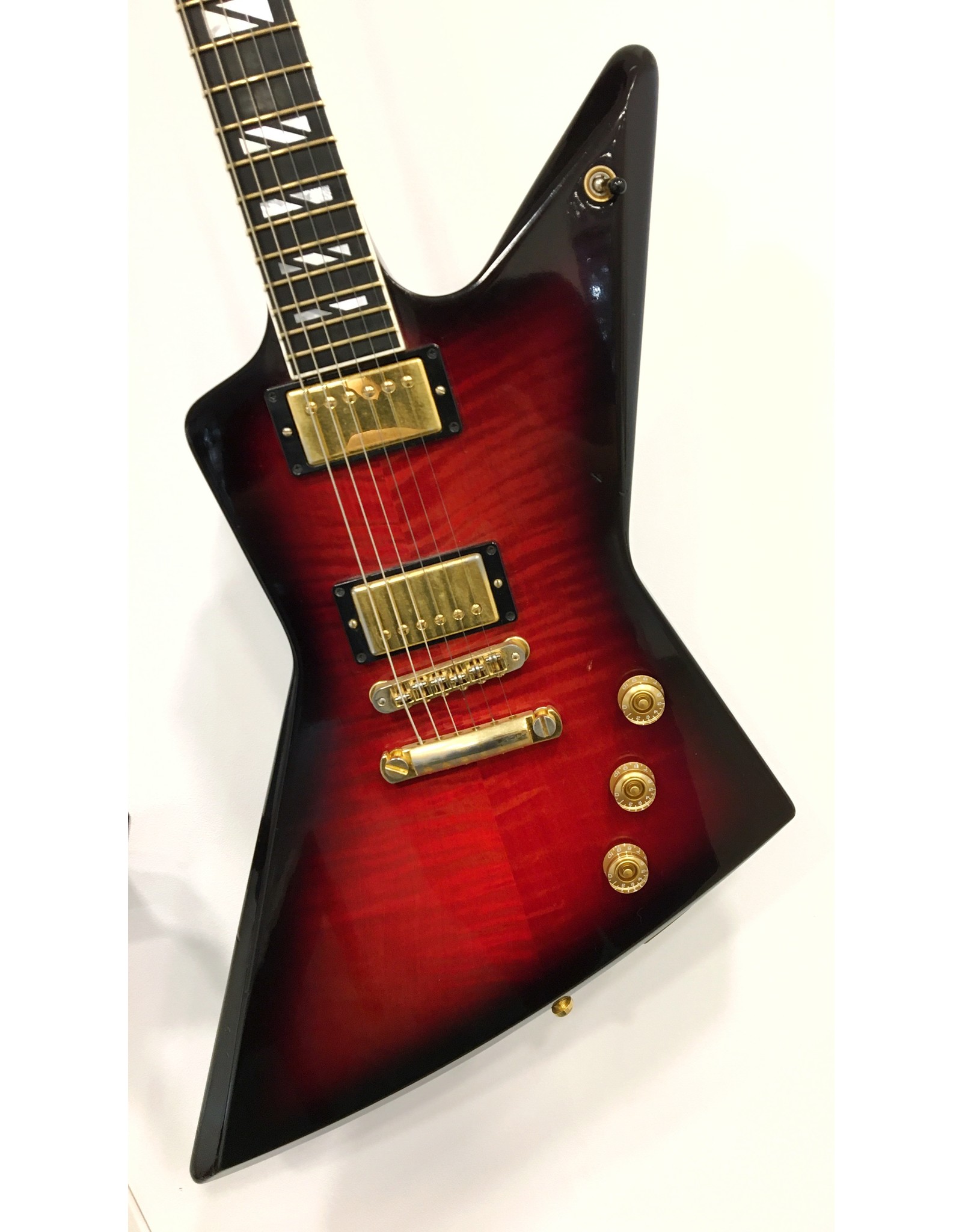 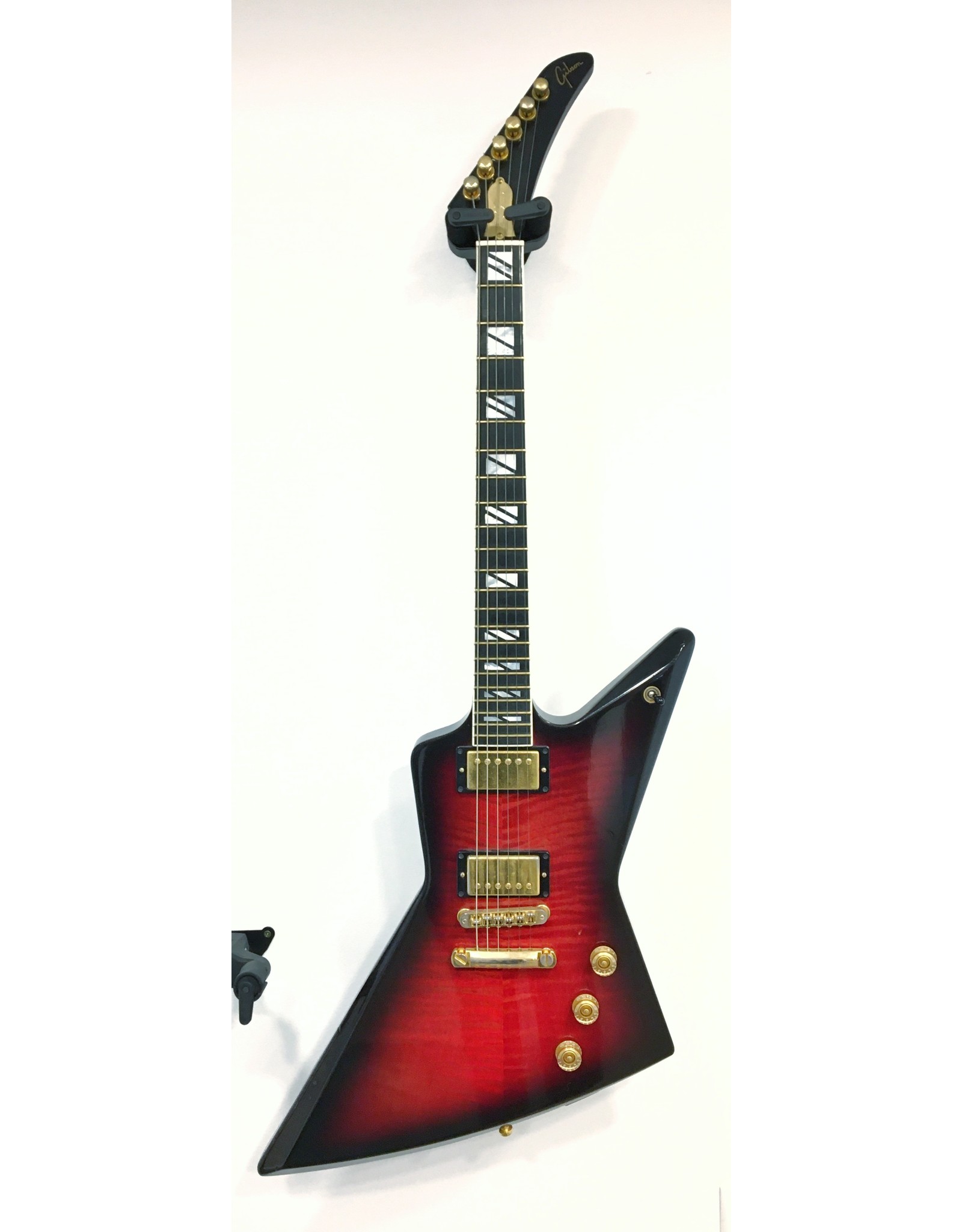 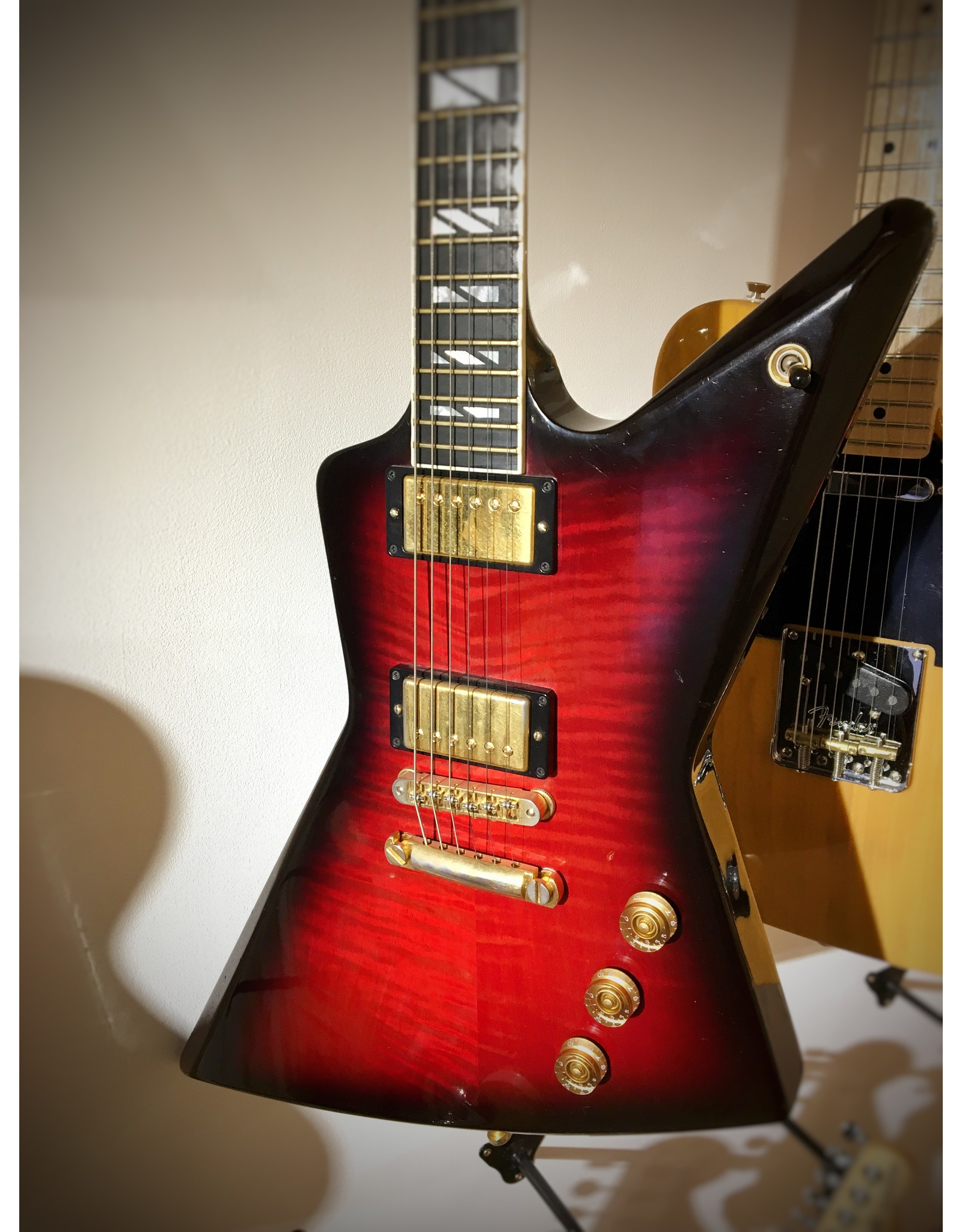 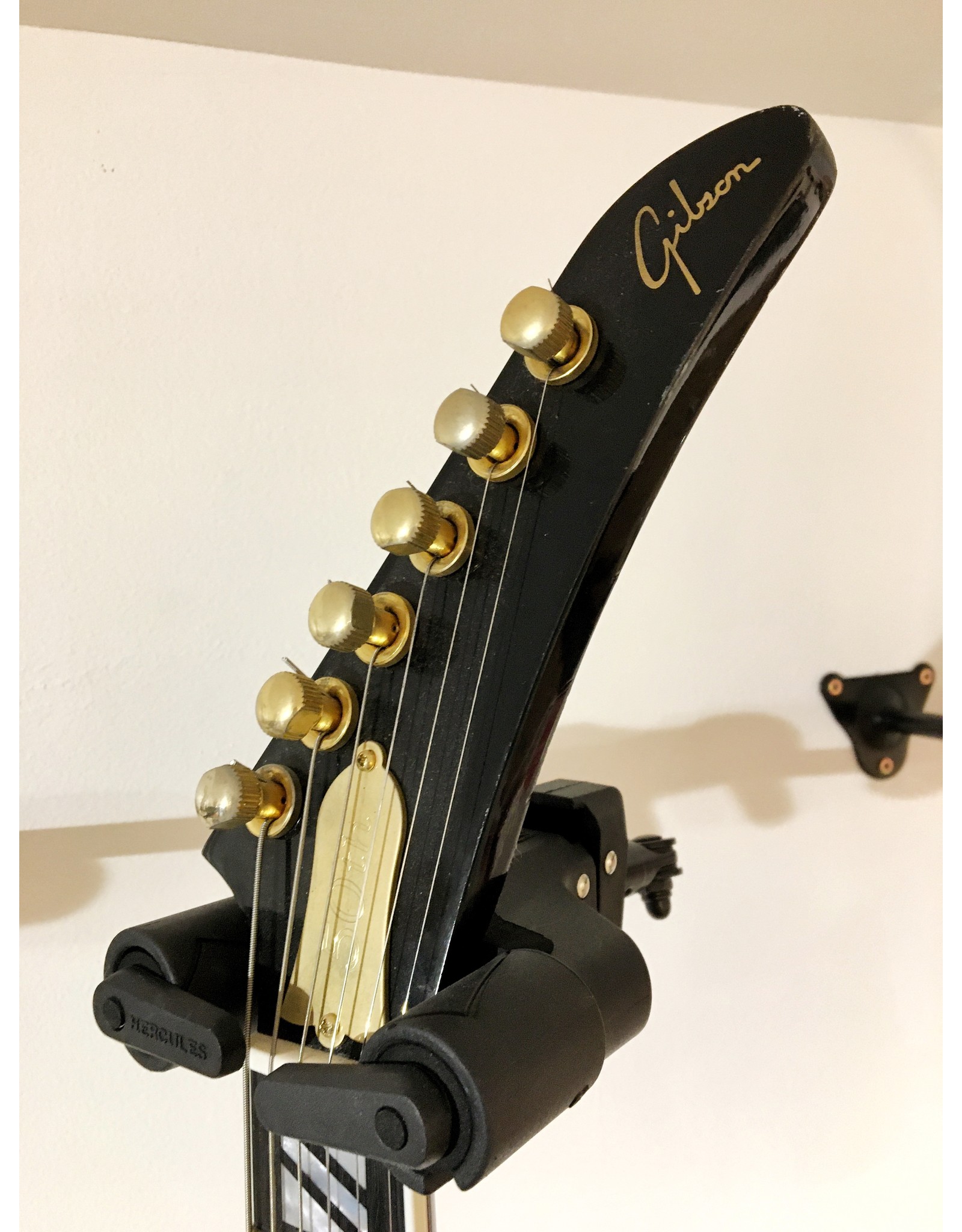 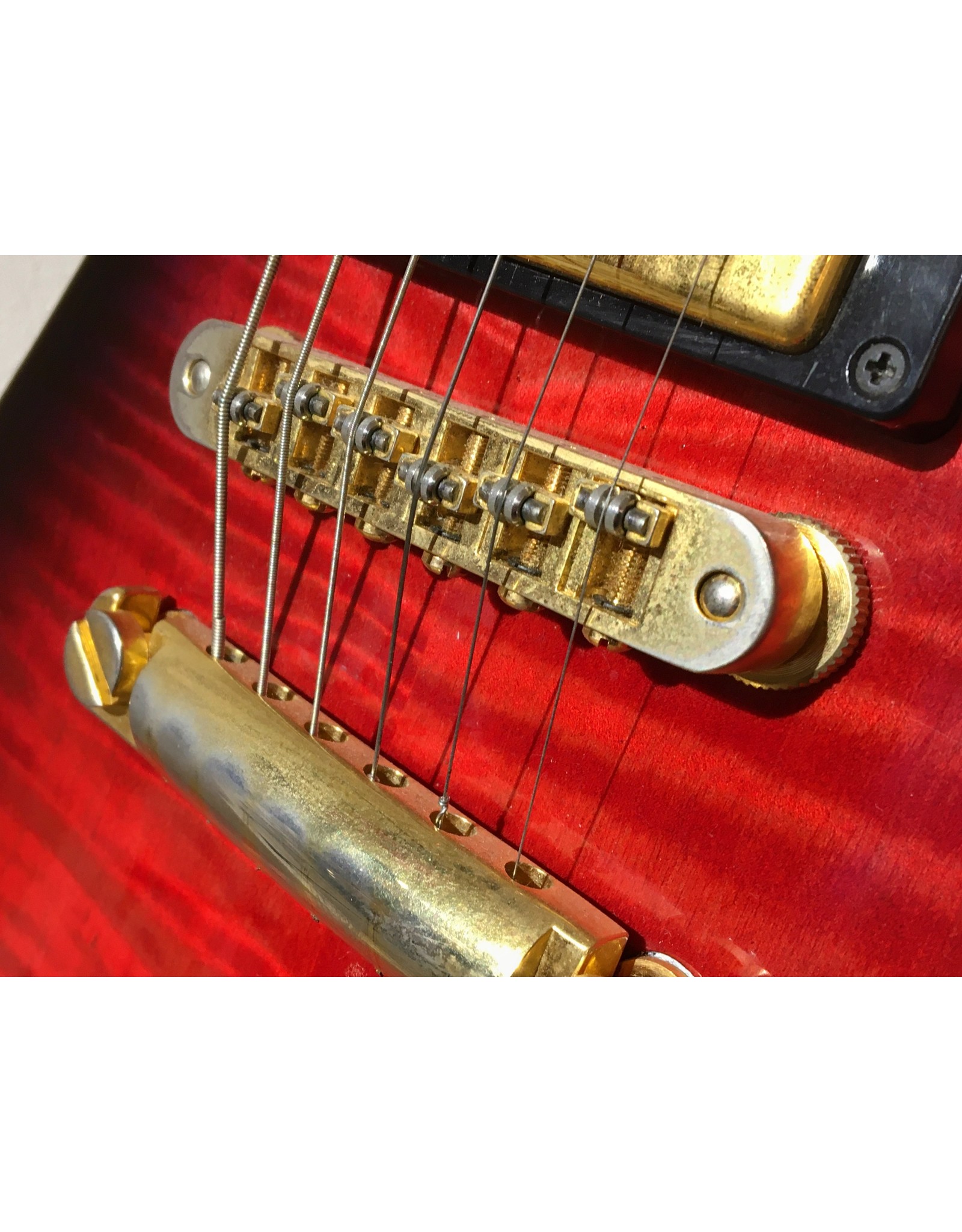 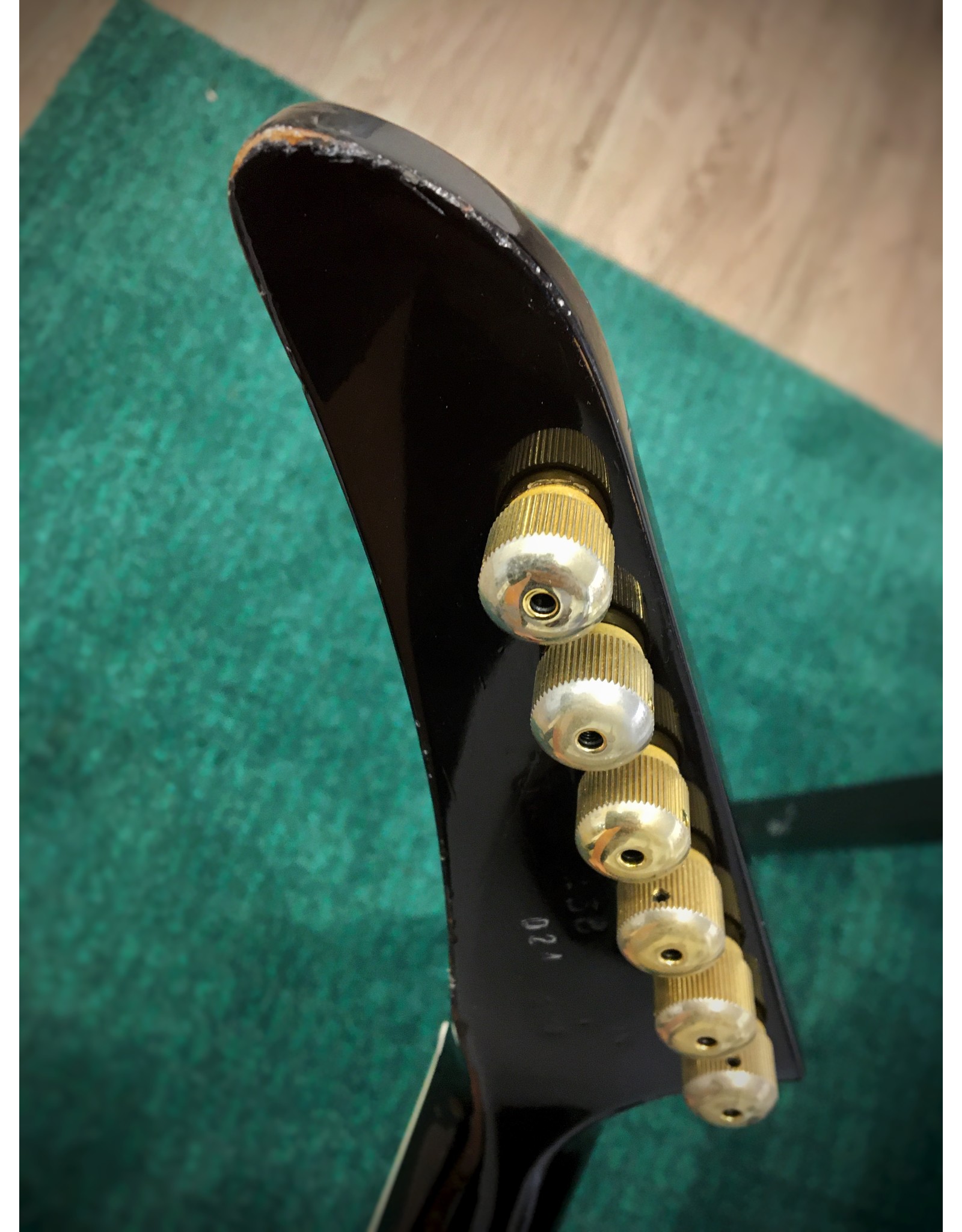 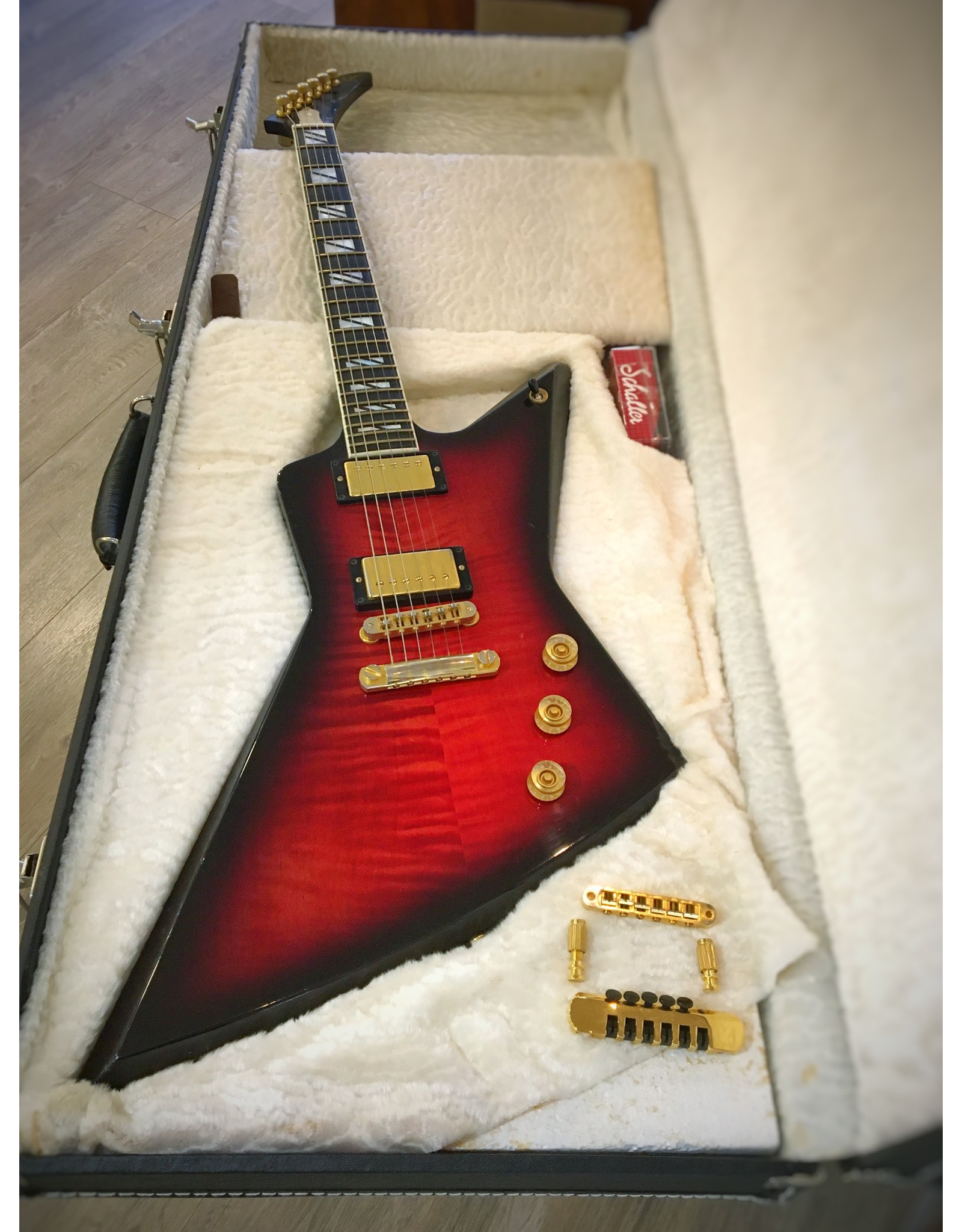 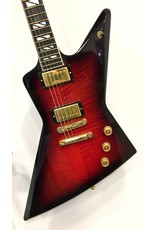 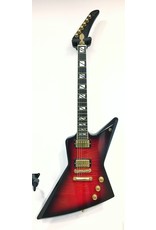 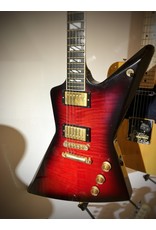 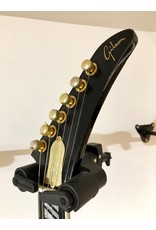 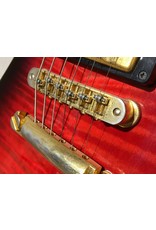 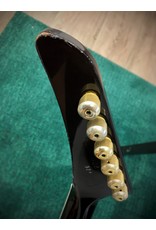 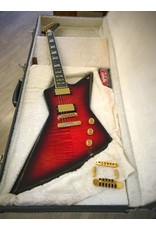 50 Year Commemorative ExplorerThe world wasn’t quite ready for the Gibson Explorer in 1958, as evidenced by production numbers that strained to meet 100 units. Now—50 years later—those same instruments are some of the most prized collectible guitars in the world, and Gibson USA is proud to honor the legacy of this truly legendary guitar by introducing the new 50-Year Commemorative Explorer. This new Guitar of the Month for October 2008 combines the time-tested elements of the original with several modern appointments worthy of today’s demanding players. The retro-style, solid mahogany body is as angular and asymmetrical today as it was the first day it left Gibson’s Kalamazoo plant in 1958. Added, however, is a AA-grade figured maple top with beveled edges, and a brand new Brimstone Burst finish. The headstock’s unique Gibson logo was recently found in a warehouse, among some old drawings belonging to Gibson President Ted McCarty. The neck is also one-piece mahogany with Gibson’s traditional ’50s rounded profile, topped by a 22-fret ebony fingerboard with pearl split-block inlays and single-ply binding. This limited edition Explorer is powered by two Gibson ’57 Classic pickups, made to the same exact specs as the original PAFs of the late 1950s and early 1960s, and packing that unmistakable Gibson PAF humbucker crunch. Other select features include gold fret wire and hardware, Steinberger Gearless tuners, and a custom Guitar of the Month case from Gibson USA. Like all of Gibson USA’s Guitars of the Month, production is limited to just 1,000 guitars.

The Gibson Logo
The Gibson logo on the new 50-Year Commemorative Explorer was recently unearthed among some old drawings belonging to legendary Gibson President Ted McCarty. The art-deco style logo was drawn by McCarty in the mid-1950s, around the same time he was conceptualizing the design of the original Explorer. Now, to celebrate the introduction of the 50-Year Commemorative Explorer, that same logo adorns the headstock of this limited edition guitar.

Adjustable Truss Rod
A Gibson innovation that revolutionized the guitar, the adjustable truss rod supports the neck and allows for adjustment to compensate for factors such as string gauge and climate change. Before its invention in the early 1930s, the truss rod was used only to strengthen and stabilize the neck. It has become a fundamental part of the guitar, and another example of Gibson’s commitment to developing the instrument.

Angled Headstock
The pointed headstock on the 50-Year Commemorative Explorer is carved out of the same piece of mahogany as the neck, then carefully angled at 14 degrees to increase the pressure on the strings, keep them in the nut slots, and enhance sustain. The 50-Year Commemorative Explorer is outfitted with gold Steinberger Gearless Tuners—a “straight through” tuner with no gears, and locking knobs on top to secure the strings and prevent slippage. These unique tuners deliver an astounding 40:1 tuning ratio for accuracy and smooth tuning action.

The Explorer ’50s Rounded Neck Profile
The ’50s rounded neck profile on the new the 50-Year Commemorative Explorer is one of Gibson’s more traditional and distinguishable features. The majority of the guitars produced by Gibson in the mid- to late-1950s had thick, round neck profiles. They have become some of the world’s most coveted instruments, played by many of the world’s greatest players. Every Gibson neck is machined in a rough mill using wood shapers to make the initial cuts, but the rest of the process is done by hand. This ensures that no two necks are exactly alike. They’ll have the basic characteristics of its respective profile, but each neck is slightly different, with a distinct but traditional feel.

22-Fret Ebony Fingerboard
The fingerboard on Gibson USA’s 50-Year Commemorative Explorer is constructed from the highest grade ebony on the planet. The resilience of this dense and durable wood makes every fingerboard extremely balanced and stable, and gives each chord and note unparalleled clarity and bite. The 12-inch radius of the fingerboard provides smooth note bending capabilities and eliminates “dead” or “choked out” notes, which can occur on fingerboards with lesser radiuses.

Gold Fret Wire
The gold fret wire on the 50-Year Commemorative Explorer is specifically designed for long life and superior wear. Gibson’s traditional “medium/jumbo” fret wire is first shaped by hand, then cut to an exact 12-inch radius. After hand pressing it into the fingerboard, a machine press finishes the job to eliminate the gap between the bottom of the fret wire and the fingerboard.

Classic Split-Block Inlays
The classic pearl split-block inlay is one of the most distinguishable features of several traditional Gibson archtops, including the LeGrand and Super 400, and it’s a fitting choice for the 50-Year Commemorative Explorer. These inlays are made from genuine Mother of Pearl, and are inserted into the fingerboard using a process that eliminates gaps and doesn’t require the use of fillers.

Set-Neck Construction
Like the majority of Gibson’s guitars, the neck on the new 50-Year Commemorative Explorer features set-neck construction, which uses glue to attach the neck to the body of the guitar, creating a very solid instrument. This ensures a “wood-to-wood” contact, no air space in the neck cavity, and maximum contact between the neck and body, allowing the neck and body to function as a single unit. The result? Better tone, better sustain, and no loose or misaligned necks.

Solid Mahogany Body with AA-Grade Maple Top
The most central feature of any Explorer is its mahogany body, which provides players a well-balanced, eye-catching alternative, with absolutely no compromises in tone, sustain, or performance. The 50-Year Commemorative Explorer’s body is a solid piece of mahogany in the classic style of the 1976 Explorer, topped with an AA-grade maple top. The only difference is the beveled edges on the commemorative model. The mahogany itself goes through the same rigorous selection process as all of Gibson’s woods, and is personally inspected and qualified by Gibson’s team of skilled wood experts. Inside the Gibson factories, humidity is maintained at 45 percent, and the temperature at 70 degrees. This insures all woods are dried to a level of “equilibrium,” where the moisture content does not change during the manufacturing process. This guarantees tight-fitting joints and no expansion, and controls the shrinkage and warping of the woods, in addition to reducing the weight. It also improves the woods’ machinability and finishing properties. Consistent moisture content means that a Gibson guitar will respond evenly to temperature and humidity changes long after it leaves the factory.

’57 Classic and ’57 Classic Plus Pickups
Among the qualities that make Gibson’s original “Patent Applied For” humbucking pickups so unique are the subtle variations between coil windings. For the first few years of their production—1955 to 1961—Gibson’s PAF humbuckers were wound using imprecise machines, resulting in pickups with slightly different output and tone, desirable to players who wanted to mix and match and explore a complete spectrum of tonal possibilities. The ’57 Classic and ’57 Classic Plus pickups are the result of Gibson’s drive to capture and recreate this renowned characteristic. Introduced in 1992, the ’57 Classic provides warm, full tone with a balanced response, packing that classic Gibson PAF humbucker crunch. The ’57 Classic Plus is the perfect bridge-position companion to the ’57 Classic, inspired by those original PAFs that received a few extra turns of wire. Both are made by Gibson to the exact same specs as the original PAFs, including Alnico II magnets, nickel-plated pole pieces, nickel slugs, maple spacers, and vintage-style, two-conductor braided wiring. Instead of enamel-coated wiring, Gibson added poly-coated wiring—which improves consistency by eliminating thin or thick spots on the wire—and wax potting, which removes all internal air space and any chance of microphonic feedback.

Tune-O-Matic Bridge and Stopbar Tailpiece
The Tune-o-matic bridge was the brainchild of legendary Gibson president Ted McCarty in 1954. At the time, it was a true revelation in intonation, and set a standard for simplicity and functionality that has never been bettered. This pioneering piece of hardware provides a firm seating for the strings, allowing the player to adjust and fine tune the intonation and string height in a matter of minutes. It also yields a great union between the strings and body, which results in excellent tone and sustain. It is combined with a separate “stopbar” tailpiece, essentially a modified version of the earlier wraparound bridge. To this day, the Tune-o-matic remains the industry standard. It is the epitome of form and function in electric guitar bridge design, and is one of the most revered and copied pieces of guitar hardware ever developed.

Brimstone Burst Nitrocellulose Finish
The deep red color of the Brimstone Burst accentuates the natural beauty of the AA flame maple top. Applying the guitar’s nitrocellulose finish is one of the most labor-intensive elements of the guitar-making process. A properly applied nitro finish requires extensive man hours, several evenly applied coats, and an exorbitant amount of drying time. A nitro finish dries to a much thinner coat than a polyurethane finish, which means there is less interference with the natural vibration of the instrument, allowing for a purer tone. A nitro finish is also a softer finish, making it easy to touch up a scratch or a ding. Very porous in nature, the finish actually gets thinner over time. It does not “seal” wood in an airtight shell—as a poly finish does—and allows the wood to breathe and age properly.
Uw review toevoegen
0 sterren gebaseerd op 0 beoordelingen
Zet op verlanglijst / Toon in vergelijking / Afdrukken
Wij slaan cookies op om onze website te verbeteren. Is dat akkoord? Ja Nee Meer over cookies »